Festival Forte just announced the second wave of acts (final line up) that will be performing at its 5th edition from August 30th to September 2nd, 2018 and I wanted to kindly ask for your support on spreading the news about it. We can also offer press accreditation and ticket giveaways for the festival. 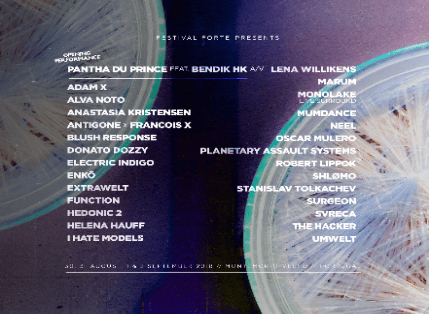 There are no words enough to describe the importance of Carsten Nicolai aka Alva Noto in the electronic music scene. Co-founder of the much respected Raster Noton label together with Olaf Bender aka Byetone and Frank Bretschneider, he is the pure example of how science can combine with art through audiovisual language. Together with Ryuichi Sakamoto, he composed the soundtrack for the acclaimed movie “The revenant” and in 2018 he released the album “Unieqav” on his new label Noton. At Festival Forte, he will be presenting his new spectacular show, which is an incredibly intense audiovisual experience that will take place inside the immersive castle walls. Robert Lippok, who will release his new album in 2018 on Raster Noton, will also present his new audiovisual show at Festival Forte.

Luke Slater will return to the castle, this time with Jaygo Bloom, who is the curator of the generative garden of the festival. Together, they will present the only Planetary Assault Systems show of the year, an exclusive audiovisual performance that will have a very special setup.

Adam X, the very important figure that built up the New York techno scene through his Sonic Groove label and the very talented french producer ShlØmo will also return to the castle as honorable members of the highest caliber.

Finally, the Portuguese Enkō and Marum complete this second round of announcements regarding the lineup of Festival Forte 2018.

The commitment to sustainability remains a concern, with the implementation of new measures that promote a greener environment, in addition to those already accomplished such as compostable WC’s, recyclable cups, paperless digital promotion and the cashless system that was awarded a prize in 2017 by the Ministry of Environment, promoter of the “Sê-lo Verde” program.

Munstac mixtape 2018 for The Italo Job